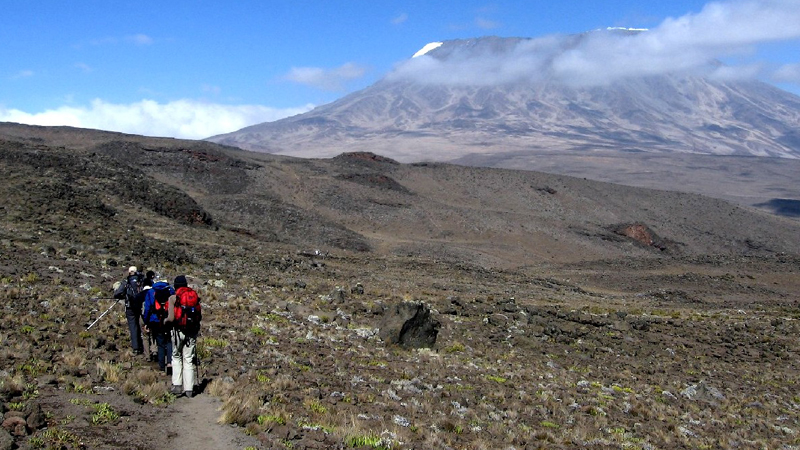 The Rongai route is the only route that approaches Kilimanjaro from the north,close to the Kenyan border. This route has low traffic but is gaining popularityamongst climbers. It is the preferred route for those wanting a more remote hike,those looking for an easier route, or those who are climbing during the rainyseason (the north side receives less precipitation). Although the minimumnumber of days required for this route is six days, seven days are recommended.Although the scenery is not as varied as the western routes, Rongai passesthrough true wilderness areas for days before joining the Marangu route at Kibocamp. This route also descends down the Marangu route.

On your arrival at Kilimanjaro international airport (JRO) our representative will pick you from airport and then transfer to hotel in Moshi for trekking briefing, dinner and overnight at The Secret Garden or similar lodge.

You will be picked up from your hotel in Moshi at 8:30 Am and then transfer to Rongai gate. Climbs of Kilimanjaro by the Rongai Route begin at the picturesque village of Nale Moru (1,950m), on a small path through potato and corn fields. After entering the pine forest, it takes approximately three to four hours to reach first camp, situated on the edge of the moorland zone.

A steady ascent across open grasslands (which attract elephant and other wildlife) brings us to second cave camp, where the views out over Amboseli and Tsavo parks in Kenya are superlative. This section of the trail takes approximately four hours.

Today you will trek up a gentle gradient to third cave, with superb views of Kibo and the eastern ice fields on the crater rim. Allow yourself three to four hours for this section of the trail. Your easy, steady pace on the Rongai Route minimizes levels of difficulty and significantly assists acclimatization.

The ascent to Kibo Hut takes about four to five hours, with the trail crossing the saddle between Mawenzi and Kibo. The remainder of this day is devoted to rest and recreation, in preparation for your attempt on the summit which starts around midnight.

It is at this stage that the climb becomes much more difficult and hikers should carry as little as possible for this stage. Making your way up a path that is flanked by the Ratzel and Rebman glaciers, you will climb for about six hours before reaching the edge of the crater between Stella and Hans Meyer points. The track around the edge of the crater is icy and rocky, so concentrate on your feet and follow your guide very closely for this section of the climb.

Another hour of climbing will bring you to the summit – Uhuru Peak, the highest point on the African continent. Enjoy your sense of achievement as you watch the rising sun reflect of Kilimanjaro’s ice-caps and glaciers. Trek down to Kibo Hut (a relatively quick descent) for a well-deserved breakfast before continuing down to your final night on the mountain at Horombo Hut.

Take time to appreciate the different flora and thick forest on this side of the mountain, as you walk down from Horombo to Marangu Gate. Now is the time to collect your certificate, say goodbye to your new mountain friends and rejoin your vehicle for the drive to the reserved lodge in Arusha, Moshi or near the airport where you will dine and spend the night.

Day 0: Departure or extend to safari/Zanzibar

Depending on your flight schedule, you will be transferred to airport or extend to safari with our safari team.

Included in the price:

Excluded from the price